2017年6月21日更新Why Europeans Get a Tattoo is Different from Japanese 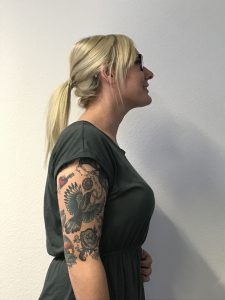 I (Chisa Sugihara) participated in a marketing training held in the German headquarters in May. Due to the sudden increase of participants at the last minute, the training started in a small room ill-fitted for the number of people. However, unexpectedly, the small physical distance between the participants helped to reduce the distance of their minds as well.

Sharni, one of the participants from UK, had a tattoo on her arm. I instantly thought she is a trendy young lady. Her beautiful blond hair caught my attention and her British accent also sounded charming to me, who was accustomed to hear the American English.

During my stay in Germany, besides Sharni, I saw quite a few men and women who had tattoos. I felt that it was almost a social phenomenon. In a restaurant, I saw a young waitress with a small tattoo around her neck. Although I did not see it, another Spanish participant in our group (in his late 20’s) also had his sister’s name engraved somewhere on his body.

I had heard that young people in Europe wore tattoos as if they were part of fashion. I also had seen people with tattoos in magazines and on TV. On Facebook I saw a picture of my best American friend’s daughter with a tattoo on her arm. Why is tattoo so popular outside Japan? How did they make a decision to have it done? I was bold enough to ask Sarni for an interview, and she agreed willingly.

Before I interviewed her, I openly told her my feelings: for a Japanese of the Showa-era, it is rather shocking that many young people have a tattoo, which is permanent. When I said, “In Japan, people think you are a member of Japanese Mafia, if you have a tattoo. You are not allowed to go to a public bath or a swimming pool, for example”, she was surprised. Well, I don’t think she will have to go to a public bath ever, but it seems like the relation of a tattoo to the mafia never occurred to her mind.

CS
Why did you decide to have a tattoo?

SH: First it was personal. Now it’s just for fun. I have altogether 22 tattoos, small and big. As for the personal one, I have a stick person of my sister. It is to remind me of my tie to her. The biggest one is the elephant on my leg.

CS
How did you decide on the image? Did you draw yourself?

SH: It depends. Sometimes I draw a picture, and show it to my tattoo artist. Sometime she shows me what she has done in the past, and I choose what I like. This bird I selected from the samples she had sent me via Instagram.

CS
Wasn’t your family against your idea?

SH: At first my mother did not like it at all. She said “You will not get a job…,”but now she likes it a lot.

CS
Can anybody have a tattoo?

CS
How much does it cost to have it done?

CS
I don’t know the market rate, but I think the price is within the reach for the young people. Did you ever have any infection or other skin problem after the treatment?

SH: No, never. They (tattoo artists) are all well trained. You don’t have to worry about that. They use sterilized equipment and sterilize everything before they do anything.

CS
(I figured her tattoo artist was a lady because Sharni always referred to the artist as “she”.) Are you happy with your decision to have the tattoos?

CS
I have one more question. I noticed that some of the popular artists in UK like Harry Styles (One Direction) and Ed Sheeran also wear tattoos. Do you think this may also be a factor for the popularity of tattoo in Europe?

SH: Yeah, that’s part of it. I like Asia. Asian food and culture.

CS
Really? What kind of Japanese food do you like? Sushi and tempura?

CS
Can you eat Ramen in UK?

SH: Yes. There are not so many restaurants, but there are some. They are popular. Japanese food is just great.

CS
You should come to Japan and eat good Sushi and Ramen in near future.

Through the interview, I found that the young generation in Europe has a completely different image toward tattoo from the Japanese. There are many reasons behind having tattoos for them, such as showing bond between family and loved ones, influence from popular artists, and foreign sentiment. Personally, I think it might be the yearning of the Western people for something different. Perhaps they stand the pain to get the image they desire just as many Japanese have a yearning for the Western culture.